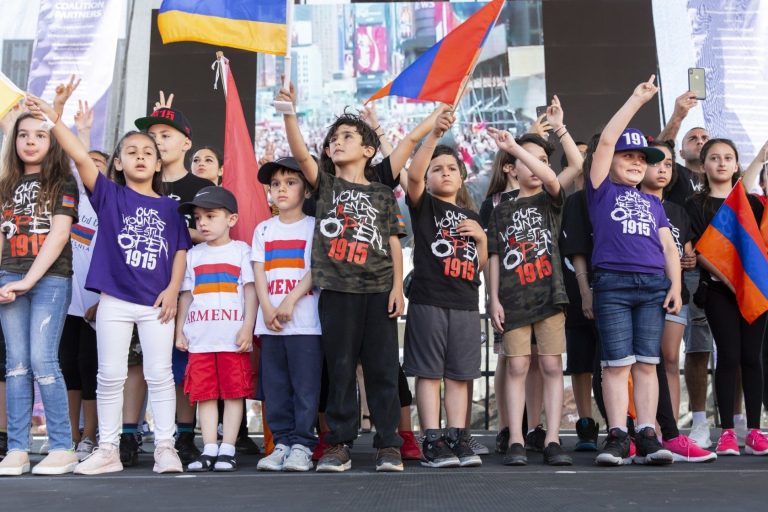 Thousands take to L.A. streets to demand recognition for the Armenian genocide

Dressed in all black and waving the colors of the Armenian flag, thousands of people marched through the streets of Los Angeles on Wednesday to demand that the century-old killings of 1.5 million Armenians officially be recognized as a genocide.

“There can be no reconciliation if it’s not recognized as a genocide,” said Vilen Khachatryan, whose Unified Young Armenians group organized the march in Little Armenia. “We march today to tell the world, ‘Never again.’”

More than 40 states, including California, and several countries have recognized the mass killings at the hands of the Ottoman Empire as a genocide. But for years, the Turkish government has refused to acknowledge it. And for almost as many years, the U.S. government has done the same, stopping short by calling the deaths an “atrocity.”

Even Barack Obama, who used the word “genocide” before being elected president, did not use it during either of his terms in office.

On Wednesday, President Trump walked that fine line again. In a statement to mark the 104th anniversary of the start of the killings, he said that the U.S. joins “the Armenian community in America and around the world in mourning the many lives lost.”

In 2015, city officials designated Hollywood Boulevard and Western Avenue in Little Armenia as Armenian Genocide Memorial Square. And in 2016, Glendale Unified became the first school district in the country to establish a day in remembrance of the genocide.

Every year, thousands of Angelenos march on the day of remembrance — and Wednesday was no different.

At the first of two back-to-back marches and rallies in Hollywood and Mid-City, young men sat on rooftops in the heat of the afternoon, watching the sea of black-clad marchers and listening to chants of “1915, never again.” At one point, the crowd topped 10,000 people, according to organizers.

The marchers wore mostly black with T-shirts that read, “Our wounds are still open 1915” and “The Armenian Genocide, we still remember.” Many waved the red, blue and orange hues of the Armenian flag. A few waved American flags in solidarity.

“I’m here to get recognition for the Armenian genocide so that the world knows what we went through,” said Rafael Vardumian, 29, who has attended the march every year since he was 13. “We’re here for recognition and justice.”

On the ground, Veronika Sarkisyan, 45, came to the march with her three sons, ages 22, 20 and 12, and her 70-year-old mother. Sarkisyan, who lives in Hollywood, said she couldn’t remember how many marches she’s attended over the years but knows it’s more than 10.

“Being here is important to me because I’m Armenian,” she said. “It’s in my blood. It’s my responsibility to be here, to remember everyone who was killed. I won’t stop coming here to march.”

Felita Shahinyan, 17, decided to skip school to attend the march with her best friend, Emily Abadzhyan, 16. They both attend Grant High School — a predominately Armenian school, where they said students are permitted to miss class on the day of remembrance.

Abadzhyan, who wore a small temporary tattoo of the Armenian flag on her wrist, has marched three times before.

“This is part of my history,” she said. “It’s very unfair that so many died. It hurts me a lot.”

For Shahinyan, it was her first time marching. She said she wanted to experience the day with her Armenian community.

“The U.S. and Turkey haven’t accepted the fact that the genocide happened,” she said. “By coming here, we want them to accept it was a genocide.”

By 1:30 p.m., most of the crowd in Little Armenia had dispersed, though Khachatryan stuck around to shake hands with several attendees. The towering 40-year-old from Tujunga has attended the Armenian genocide remembrance march for 18 years, and he intends to come to many more.

“Every member in the Armenian community has lost someone in the genocide,” he said. “Many have ancestors who were killed. This is personal for so many people.”

The second rally and march, organized by the Armenian Genocide Committee, was even bigger. It ended outside the Consulate General of Turkey on Wilshire Boulevard, where Mayor Eric Garcetti spoke.

Sosy Kevonian, 70, said she attended both events and has for years, in addition to marching in Lebanon and Armenia for the same cause.

“I’m here to commemorate the memory of my ancestors,” said the West Hills resident, who was with her son and grandchildren Wednesday. “To pay respect.”