Our Wounds Are Still Open 1915-2015 T-shirts with inscriptions 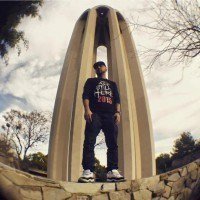 YEREVAN. – T-shirts with inscriptions “Our Wounds Are Still Open 1915” have become popular among Armenians for several years.A group of American Armenians, among them rapper R-Mean, decided to raise awareness about the Armenian Genocide. In an interview with Armenian News-NEWS.am R-Mean told about their plans for 2015 and the recent incident over banning T-shirts at Americana at Brand shopping center.

Your shirts “Our Wounds Are Still Open 1915” have become very popular in U.S., Armenia and all over the world. What new project have you prepared for 2015?

Yes, the shirts were part of our “Open Wounds 1915” campaign we launched together with my new music video for the song “ Open Wounds” in 2013 to use hip hop, fashion, and social media to spread awareness about our cause, and overall injustice in the world, specifically targeting the youth teaching them about injustice and getting them involved.

I always felt like the youth nowadays is very fashionable and appreciates a positive message, so instead of just making a T-Shirt that people wear on April 24th to march our goal was to make something that people (including non-Armenians) would like to wear year-round. And at the same time make it a conversation piece so people would ask what the shirt is about. Word of mouth is still the best form of promotion. For 2015 we made a variation of the same shirt, but with a more positive perspective. Instead of it saying “Our Wounds Are Still Open 1915”, the new shirt says “We Are Still Here 2015”. I think it’s important to change our attitude to a more positive and strong one because after all, we are survivors and Turkey failed. We are still here.

Yes the T-shirts are currently being sold. The Americana informed us of some “complaints” they received and attempted to ban the sale of all “genocide-related” merchandise after they initially approved it. They would not tell us who complained or what exactly the complaints entailed. We explained how ridiculous that was and eventually we were told we could still sell the merchandise but not display it. Once the word got out to social media the whole community was outraged. We personally have yet to receive an apology to this day. We are still not displaying the shirts but we are selling them. In 2015 the injustice still continues. Their conduct has added salt to the open wounds of the Armenian people and that’s why we filed a lawsuit to prove that the Armenian people are still here, will not give up, and will advocate for what is just and true.

Last year you performed a song dedicated to the victims of the Armenian Genocide in Times Square in New York. What shows do you plan for this April?

The song that I performed on Times Square last year is called “Open Wounds”. This song is the reason we started creating the “Our Wounds Are Still Open” shirts since it is a literal quote from a lyric in the song. The song is the whole foundation of our campaign. I have performed it at countless schools and events all around the world. This year I will be going on the official “Open Wounds 1915” tour which will include a big Hip Hop concert in LA as well as me performing at the annual “Silence The Lies, Rock The Truth“ show on April 24th in LA with artists like Sebu from Capital Cities and K’noup from Viza. I will also be performing in Sacramento, New Jersey, and New York the week of April 24th and then in Washington DC, Toronto, and Detroit in May. Finally, I will be having concerts in Lebanon and Armenia in the summer time.