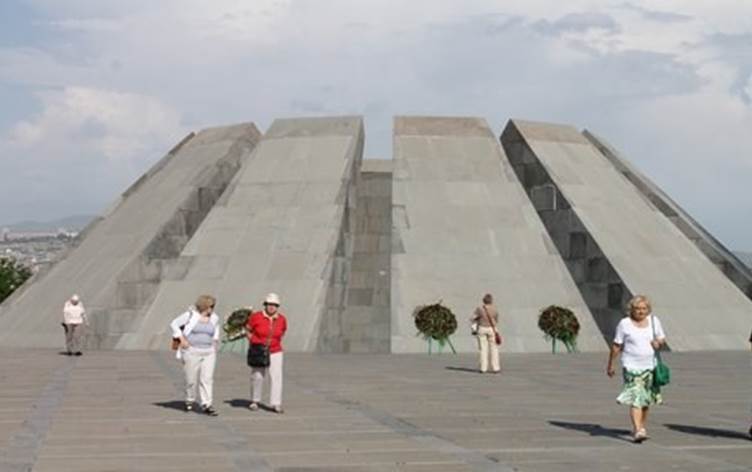 YEREVAN, Armenia – When he complains that the world’s failure to officially recognize the 1915 mass killings of Armenians by the Ottoman Turks remains “an open wound,” Suren Manukyan is expressing a common sentiment of his people.

“Because Turkey and most of the world do not recognize it, it continues to be an open wound for us,” Manukyan, the deputy director at the Armenian Genocide-Museum Institute in Yerevan, told Rudaw.

Today, on the centenary of the April 24, 1915 pogroms in which 1.5 million Armenians are believed to have been systematically killed – and a larger number forcibly evicted from the Ottoman Empire — only 24 nations officially recognize the mass killings as genocide.

Earlier this month Pope Francis called the massacres “the first genocide of the 20th century,” angering Turkey and unleashing a chain of events: Turkey first recalled its Vatican ambassador, then its envoy in Austria after the parliament there issued a declaration recognizing the killings as genocide.

On Friday the parliament in Germany, which has close ties with Turkey, is set to adopt a motion using the word genocide over the massacre.

”Every recognition from each state increases our safety and prevents more genocides,” said Manukyan.

On this day a century ago Turkish authorities arrested Istanbul’s 600 leading Armenians and rounded up another 5,000 from the Armenian quarter.  It was the beginning of a pogrom in which 1.5 million Armenians are believed to have been systematically executed, and more driven out.

Manukyan believes that, if the massacre had been recognized and justice served, subsequent genocides may not have occurred. As proof, he notes that, when Hitler’s top generals were worried about the world’s response to his planned extermination of Jews, he is reported to have asked: “Who speaks today of the extermination of the Armenians?”

For Manukyan, “Every genocide is a consequence of past genocides.”

Harout Ekmanian, an Armenian journalist from Aleppo who fled the Syrian civil war for Yerevan, agreed with Manukyan: “recognition is important, because that would help end the culture of impunity in the region and serve as an example to the world,” he told Rudaw.

For both men, many of the problems in the region today are the results of crimes against humanity that happened a century ago.

“State organized crimes and the rise of ISIS have direct links with the mentality and psychology that carried on similar acts in 1915 against not only Armenians, but also Assyrians, Yezidis and others,” Ekmanian said.

Turkey acknowledges that Armenians and other minorities were killed and deported during World War I. But it denies that they were genocidal acts. It claims the numbers have been exaggerated and that killings were committed by both sides.

According to Daniella Kuzmanovic, lecturer at Copenhagen University and an expert on Turkey, many Turks fear that recognition could mean having to compensate descendants of victims.

“However, it does not seem very realistic. It will be difficult to hold a current state that did not exist at that time, in 1915, responsible,” Kuzmanovic said.

In addition, Turkey fears Armenians will demand territory back, since eastern Anatolia at that time was populated by many Armenians, Kuzmanovic explained: “But that is not a realistic either. No state, outside Turkey, agrees that Armenia has a claim on Turkish territories.”

The real threat and reason for the Turkish denial of genocide appears to lie in protecting national honor.

“The threat of insulting the national honor by being associated with  genocide is in itself enough,” Kuzmanovic said.

Most Turks know hardly anything about this cruel chapter in Ottoman history.

“They have not been exposed to it in Turkish school systems, so the denial is not necessarily a political strategy but also a consequence of the fact that they do not know other stories,” Kuzmanovic said.

In 2013 Ahmed Turk, a Kurdish politician in Turkey, declared that the Kurds have their share of “guilt in the genocide, too,” and apologized to the Armenians.

”Our fathers and grandfathers were used against Assyrians and Yezidis, as well as against Armenians. They persecuted these people; their hands are stained with blood. We as the descendants apologize,” Turk said.

Some Kurdish tribes are reported to have helped the Ottoman government in the killings. Others, for example Kurds in Dersim and Mardin, resisted and helped the Armenians by giving them shelter, a hiding place or help in getting to Russian-held territories.

“Not everyone saved them for humanitarian reasons. Some Kurds let the men be killed to subsequently take their women,” according to Pakrat Estukyan, editor of an Armenian newspaper in Istanbul.

”Kurds were just tools in the implementation of the genocide,” maintained  Manukyan.  There were “a lot of cases of Kurds saving Armenians.”