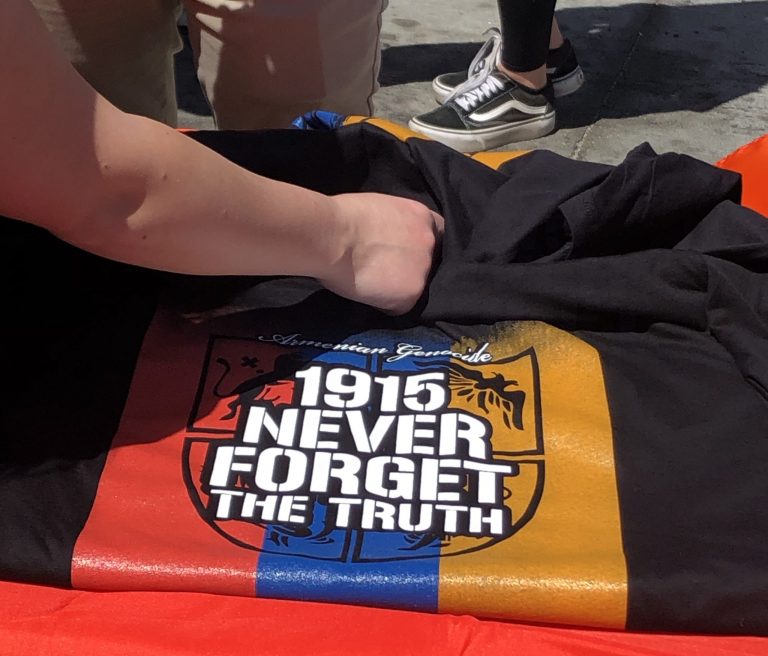 Yesterday, on April 24 which is the Armenian Genocide Remembrance Day, I attended and live-tweeted the March for Justice at the Turkish consulate, an event held annually in Los Angeles.

This coverage of the protest follows two recently published articles on the subject, prompted by the discovery that Turkey distributed denialist propaganda at last year’s Muslim American Society’s West Coast convention on November 22 to 24 at the Ontario Convention Center in Ontario, California.

In recent years Middle Eastern Islamist alliances have shifted, with Turkey now acting as ally and patron of the international Muslim Brotherhood and the dozens of domestic groups it founded or supported over the last 55 years across North America. As a consequence of this, Turkey’s position of denying the deaths of 1.5 million Armenians and also Assyrian and Greek minorities has been amplified. Denial of the Genocide has prompted hate crimes and obscured modern day anti-Armenian pogroms, many perpetuated by neighboring Azerbaijan. It is important for Counter-Islamists to familiarize themselves with this history and ongoing conflicts around it not only for the basic historicity of it, but also because it reveals the low morality of Erdogan’s Turkey and the Islamist alliance he now effectively leads. If Erdogan and his fellow Islamists will lie about the systematic slaughter of over 1.5 million people, what other falsehoods will they propagandize and who else will they demonize?

The March4Justice website said to meet at the Grove, a large outdoor shopping area with abundant parking, where shuttles would be available. While waiting for the shuttle to leave another example of the Armenian flags-on-cars trend drove by

After the shuttle ride and a walk down three blocks, the streets which had been closed for the event appeared. There was a stage set up where the chants would be led, directions given, and finally speeches delivered from local politicians. The “Our Wounds Are Still Open 1915” logo worn by many attendees would be familiar to those who have driven through Burbank and Glendale where it appears on cars and storefronts. Plenty of kids and family participated. It was encouraging to see signs specifically calling out Turkey’s Islamist president Recep Tayyip Erdoğan.

The Armenian youth presence could not be missed as they provided organization, security, leadership, and especially numbers, with different groups wearing different colors of shirts.